“ You too can bring a change. All you need to do is start ”

Sangopita - A Shelter For Care

The inspiration behind the inception of SANGOPITA is a mentally challenged child and the family’s response. The founder members when blessed with a child with cerebral palsy went through a very difficult phase. The wandering from one doctor to another hospital, getting discouraged with Doctor’s hopelessness and accepting to live with the trauma put them into a depression. Next phase started with their visits to therapists, special school, getting trained to attend to special needs all in different located places.

These continual traumas led the founder to ponder and take a broader view. They found that there is a significant population exists of similar children around them. Instead of drowning in self pity, they took a positive step and took the challenge of providing services to such children and families under a single roof. Thus in 2003 Mr. & Mrs. Sugwekar laid the foundation of SANGOPITA.


Our Mission is to give peace to parents and progress to children. We visualize a society which accepts, mentally challenged population as its bona fide part by spreading awareness and supporting them to lead a dignified life.

SANGOPITA runs a day care center where challenged children live in a commune like environment. They get personalized Care, love and affection, education, entertainment, medication, needed therapies and vocational trainings. The institution caters to children from across India, without discrimination of gender, caste, religion. A parent working committee monitors the activities and appraises parent’s feedbacks.


Being a NGO and not affiliated to any fund providing trusts, SANGOPITA greatly depends for its smooth running on community support. During the last 8 years, our efforts and results have been viewed not only empathetically but also critically by individuals and organizations.

SANGOPITA continually interacts with fellow NGO’s in the neighborhood and exchange of ideas are done. A seminar on Caregiver’s problems and issues had been arranged by SANGOPITA for personnel from other NGO’s in an effort to train the staff for better understanding and performance.

Presently, SANGOPITA has 47 number of wards in their residential center and 23 students in Daycare center. Residential center has a separate dormitory for female wards. The staff managing the center consist of Caregivers, Social worker, Nurse, Special educators and housemasters.


Some of the milestones achieved are:

Our challenges mainly are :

Our Appeal :
We on behalf of our special children, appeal to one and all for :

We request and appeal to corporate sector and institutions/organizations for :

Raju is virtually an orphan, since he has only a brother and grandmother. The brother works in a shop which is also his residence. Grandmother duet her age, herself is dependent on others. Due to CP he has speech problems, his hands are bent and he walks with a limp. A social worker saw his plight and admitted him to SANGOPITA.

Before intervention :
Raju was fully dependent on others for his daily routines like brushing, toilets, bath, dressing, combing etc. He could not communicate as he could not speak. Due to limb deformity, he could not walk properly; his motor skills were almost nil. He would continuously salivate and bite and hit other children. He would be reluctant to come to class room sessions and his attention span was minimal.

After intervention :
Post admission, slowly but surely, with continuous care and training, things started to change for the better. He also started responding to given commands. One by one he learnt self help skills and now he tries to perform his morning routines on his own thus requires less caregivers time. He has started coming to class room of his own and takes permission while entering and exiting. He is now aware of bowel and bladder movements and cleans the bathroom after urinating. Though he still cannot speak, he gestures to convey his needs. He attends the prayer daily. He now recognizes and differentiates between different shapes. He can sense and feel cold and hot objects. He also tries to colour the drawings. He takes part in sports and enjoys TV. Music . His earlier condition of continuous salivation has come down considerably. Even his habit of hitting other children has decreased. Regular therapy has resulted in his hand getting a bit straight.

During 2014-15. his progress has continued and his recognition and differentiation between small/big, hot/cold, various geometrical shapes has further improved. He has started taking interest in colouring pictures. With development in motor skills, he participates in outdoor games like ball passing, ball throw and also has started playing cricket. His continuous salivating has reduced and tries to use kerchief. He likes songs, dances, TV etc and shows his pleasure by clapping when someone dances With constant prompting and repetitive instructions, his attention span has increased. He attends classes regularly and tries to do all the activities given by sp. Teacher. His responses are better and have progressed in self help skills like dressing, eating etc. He also colours given picture in a better way. His social skill also has improved.. He mingles with other children and tries to help others. In sports he plays “passing the ball’,’ bowling alley’ and aims better in “ringing the object’. His salivating problem has reduced but speech problem still persists.

He needs continued therapies and medication but has potential for further improvements. 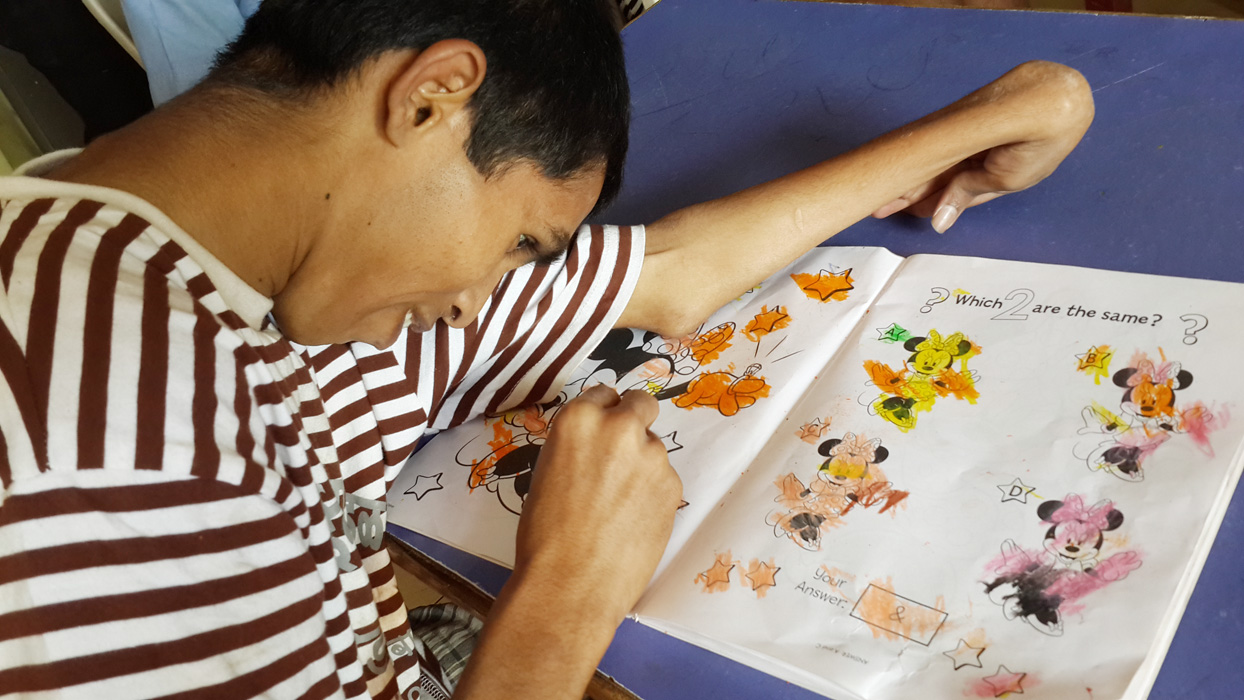 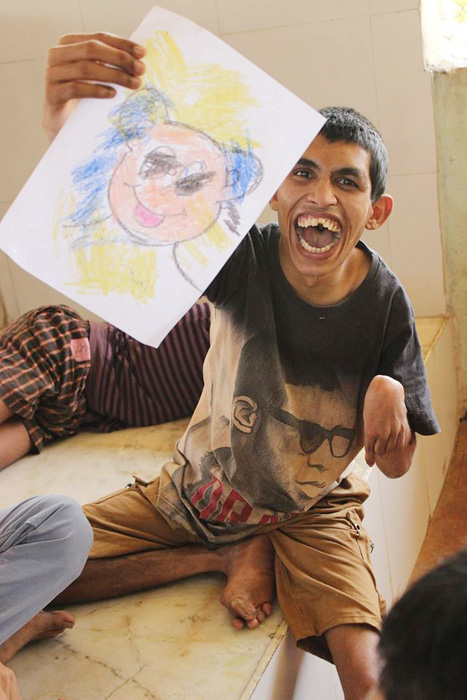 Abandoned by the biological mother, Aarya was picked up by IAPA a social organisation in Mumbai which takes care of orphans. After spending some time in it, she was fortunate to get foster parents. For some period, the foster parents took good care of Aarya but when slowly but surely they found that apart from physical deformity (immovable down the waistline) Aarya also is a mentally challenged girl, they were worried since it is a 24/7 caring job to raise a challenged child. Arrya was fortunate, that the foster parents through IAPA came to know of “SANGOPITA A shelter for Care”

Before intervention :
Aarya started her life afresh for the third time. She was completely dependent when admitted in 2009. She was on bed rest and used to continuously sleep for hours together. She would wet the bed and did not understand verbal instructions. She was adamant and would not try to mingle. She was on medication of heavy doses and was prone to frequent cold, constrained to a wheel chair she would not move. Her general health was poor and used to salivate involuntarily.

After intervention :
Slowly but surely, things started to change. For once, she found a real family with similar other children, that she could relate to. With continued care and trainings, today after six years at the physical age of 14, she is toilet trained, dresses herself. She participates in group sports, responds to music with clapping.. She tries to sit in the wheel chair on her own and tries to run it independently. Her dependency level has reduced to a good extent. She has learnt to, brush the teeth.. Comb her hair.. Eat with own hands. She tries to bath with help. Though she has speech problem, now she is able to utter monosyllables. She is now able to alight and sit on the prayer platform and gets back on the chair. She responds with a smile when spoken to, tries to solve block puzzles, and tries to write numerals one and two. She likes to mingle with other children and enjoys songs.

An orphan with Cerebral Palsy, Aarya has found joys of and dignity at SANGOPITA which she deserves but was denied. Though she still needs physio and speech therapy apart from various other functional trainings, she is no more an orphan! 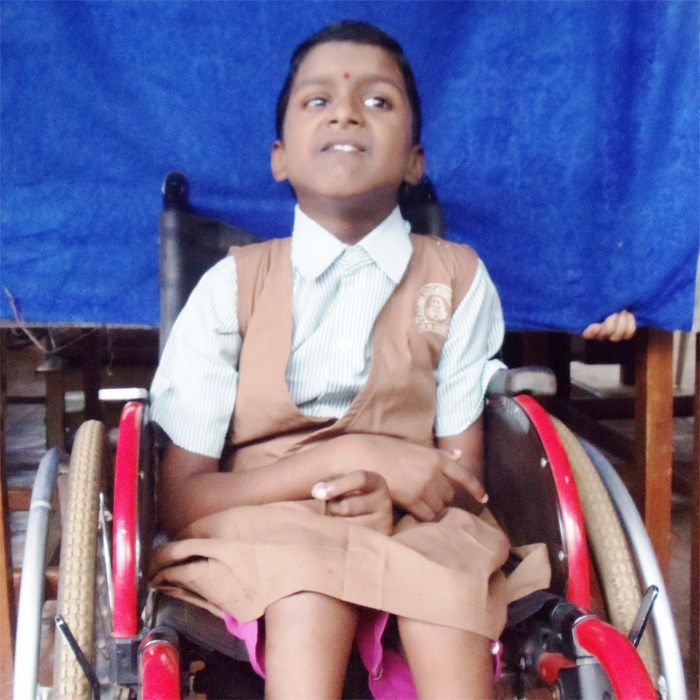 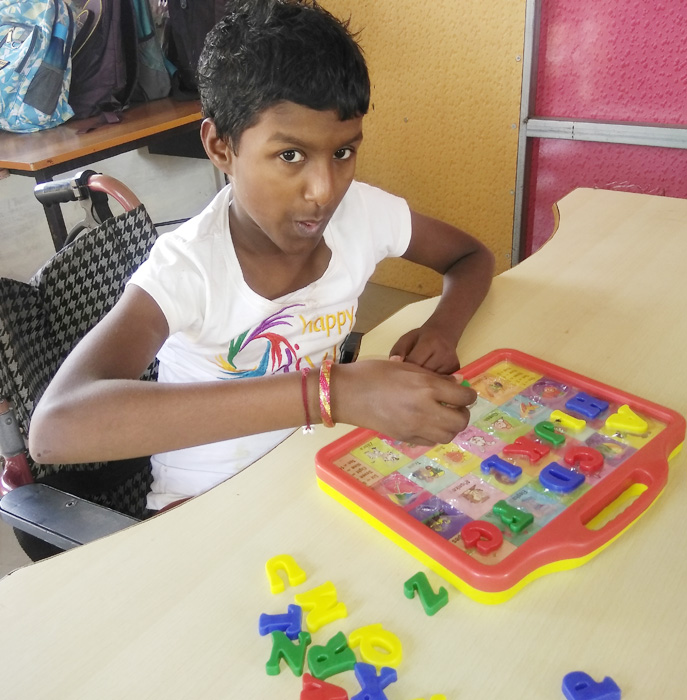